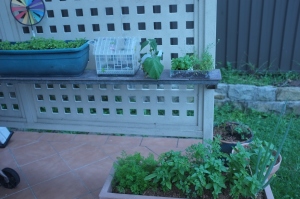 I’m about a third of the way towards my 40th birthday deadline which I set myself in my 40 Things For 40 Years Challenge. I’ve completed a few of the easier things, such as buying a beautiful dining table, and growing my own herbs and seeds in pots on our verandah.

A couple more challenges are underway, like going to monthly confession, and planning for the mothers’ retreat I’ll be hosting in August.

There is still quite a lot to do though, and looking over the list today I counted 26 items I haven’t begun including some big ones that require a greater investment of time and/or money. Yikes!

Time is  the biggest issue. My writing and editing work has stepped up a notch and I’ve taken on a volunteer role at my daughter’s school, so I’ve got a lot less disposable time in general.

But as an inveterate list-maker I’ve gained some valuable experience in making my to-do lists doable rather than daunting. Here are some things I’m doing so that I can have everything neatly crossed off by the time I blow out my candles again.

After doing all of these my remaining 26 items drops down to 19 while I should still end up with 40 great things accomplished. That’s better!

I actually use long to-do lists very rarely these days.What do you do when you feel overwhelmed by a task list?