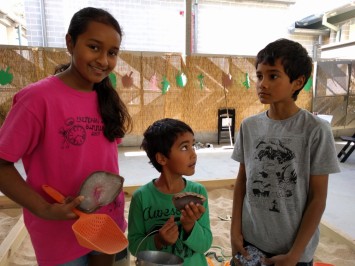 This year I decided to trick myself into getting out and about a bit more by buying a family membership for the Museum of Applied Sciences. It gives us free entry into the Powerhouse Museum, the Museums Discovery Centre, and the Sydney Observatory, plus some other attractions outside of Sydney that I thought we might get to visit this year.

I would normally be commitment-phobic about spending money upfront on stuff we might not use. But we’ve now used it twice already. I took the kids to the Discovery Centre on Tuesday, and they wanted to go back today. As it’s close to where we live, meaning I can still get some work done today, I’m happy to oblige.

The centre is the storehouse for all of the overflow from a bunch of other Sydney museums. The kids enjoyed looking around at everything more than I thought they would. We all liked the big chests of drawers in each section with ‘please open’ signs on them – and opened every single one to find out what treasures were inside.

On Holy Thursday I went to the Jewish Museum in Sydney with a work excursion, and I enjoyed that even more, though it was sobering. I kept thinking how much our 13-year old would appreciate it, especially the chance to chat with some of the survivors of the holocaust who are founders of the museum.

It is really beautifully, done, weaving holocaust survivors’ stories of love, courage, acts of solidarity from non-Jews, and even humour amid those of unimaginable horror and loss. Our young tour guide’s grandparents, or at least one of them (I don’t remember) died in one of the death camps during the war.

A couple of the exhibition spaces we didn’t see, which include old video footage from the concentration camps taken by American soldiers, aren’t really suitable for children or more sensitive adults, and she told us she prefers to avoid showing people through them herself whenever she can, but that we were welcome to visit them after her tour. I opted not to. Some things don’t have to be seen to be believed, or to be changed by.

I’m running out of time to take the kids to an Eygptian mummies exhibition before it leaves the Powerhouse, which I hoped to do as well. But if we don’t make it at least I’ve done more museum-going in three weeks than I have in the past 10 years!

Pic: Kids at the centre