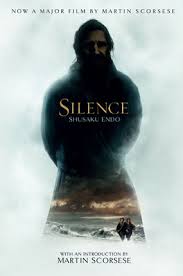 I’m on the tail end of the flu and a bit tired tonight, so these are just some snippets from the past little bit:

On the weekend we attended a family bush dance put on at our kids’ school. It was fun and beautifully organised with lots of fun stuff to do, but I was sick and ready to go home well before the kids were.

I’m taking a break from my daily walks. I got shin splints!! I’ve never exercised consistently before, so I’ve never had an exercise-related injury before. I was quite excited when I realised it was shin splints I had, not the sudden (dreaded) appearance of my first varicose veins. My legs are nearly back to normal after a few days off from power walking up and down the hills here like a crazy lady. Silly me.

I read Silence by Shūsaku Endō (pictured). It’s taken me a while to get around to this historical novel following the fates of European missionaries to Japan in the 1600s. I had no idea it was so good, only that it was the book that Martin Scorsese’s film was based on (which I didn’t see). I’m glad I read the book first because it’s just not the same to come to a classic like this by way of its film adaptation.

I also read Lord of the World by Robert Hugh Benson. I finished this on the way to the zoo the other week (because I wasn’t driving). It’s a 1907 apocalyptic novel highly recommended by Pope Francis to journalists wanting to know what he means when he speaks of ideological colonisation.  It is amazingly prescient of our times, and there are powerful characters and moments described but I got impatient with the author’s overly long descriptions in some parts of a person’s inner state or the atmosphere of a crowd or the weather or some such. The final few pages were kind of agonising to read, but I’m not surprised – Benson didn’t exactly set himself an easy task with the ending.

Thinking. I’m thinking of reviving an old idea I’ve had knocking around for a children’s picture book. The classic Mem Fox has some great advice for would-be authors on her personal website and I’m feeling quite inspired. The only big question is: Do I aim it for a mainstream audience or a Catholic/Christian one? Both have their advantages. Any thoughts?